On Tuesday 26 November, communities and stakeholders packed into a conference centre in Suva in vibrant kalavata (matching shirts and dresses worn for celebrations), to hear about RISE’s research progress in Fiji so far, and find out which six communities will be upgraded first.

Over the past year, residents have consistently and generously opened up their communities for RISE researchers to collect samples and build up a baseline picture of the health of the environment and communities. The event on Tuesday was an opportunity to celebrate this baseline completion and for RISE to share preliminary findings.

‘This transparency is important,’ Dr Turagabeci explained, ‘because we have been very open with communities from the start of the program, and we need to keep people informed and engaged at every step of the way’. 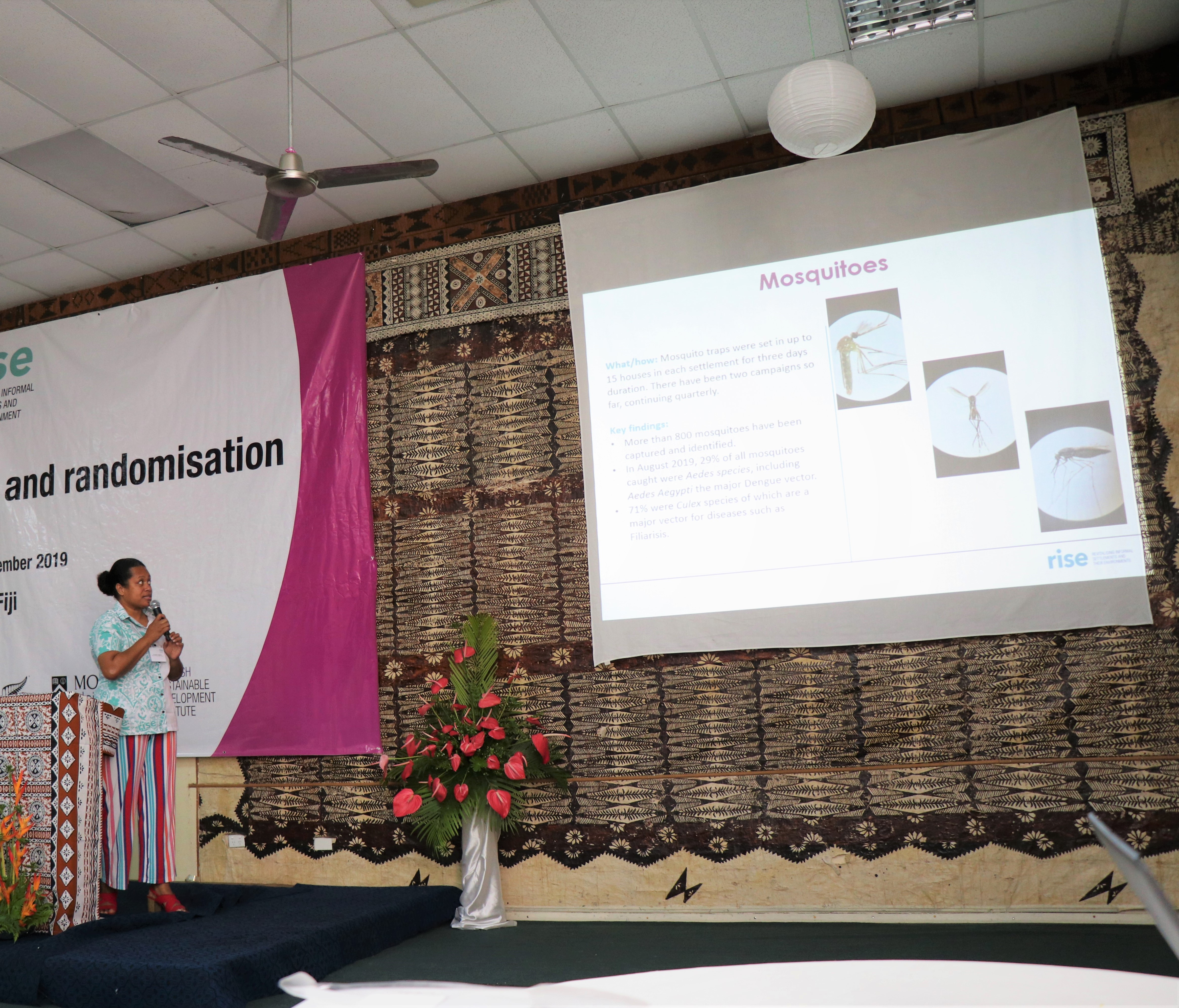 Dr Turagabeci from Fiji National University explains that about one-third of mosquitoes captured in the 12 settlements
in August were Aedes species, including Aedes Aegypti, a major vector of dengue.

Following the baseline presentation, it was time to randomly assign communities to the earlier- and later-phase intervention groups.

Randomisation – the scientific process of assigning participants to a treatment group – is usually performed by biostaticians at their computers, then participants are told. In RISE, Melbourne University biostaticians devised the coding methods allocating communities to different groups: 60 possible combinations were generated, assigning the 12 settlements into either the earlier intervention group, or the later intervention group. 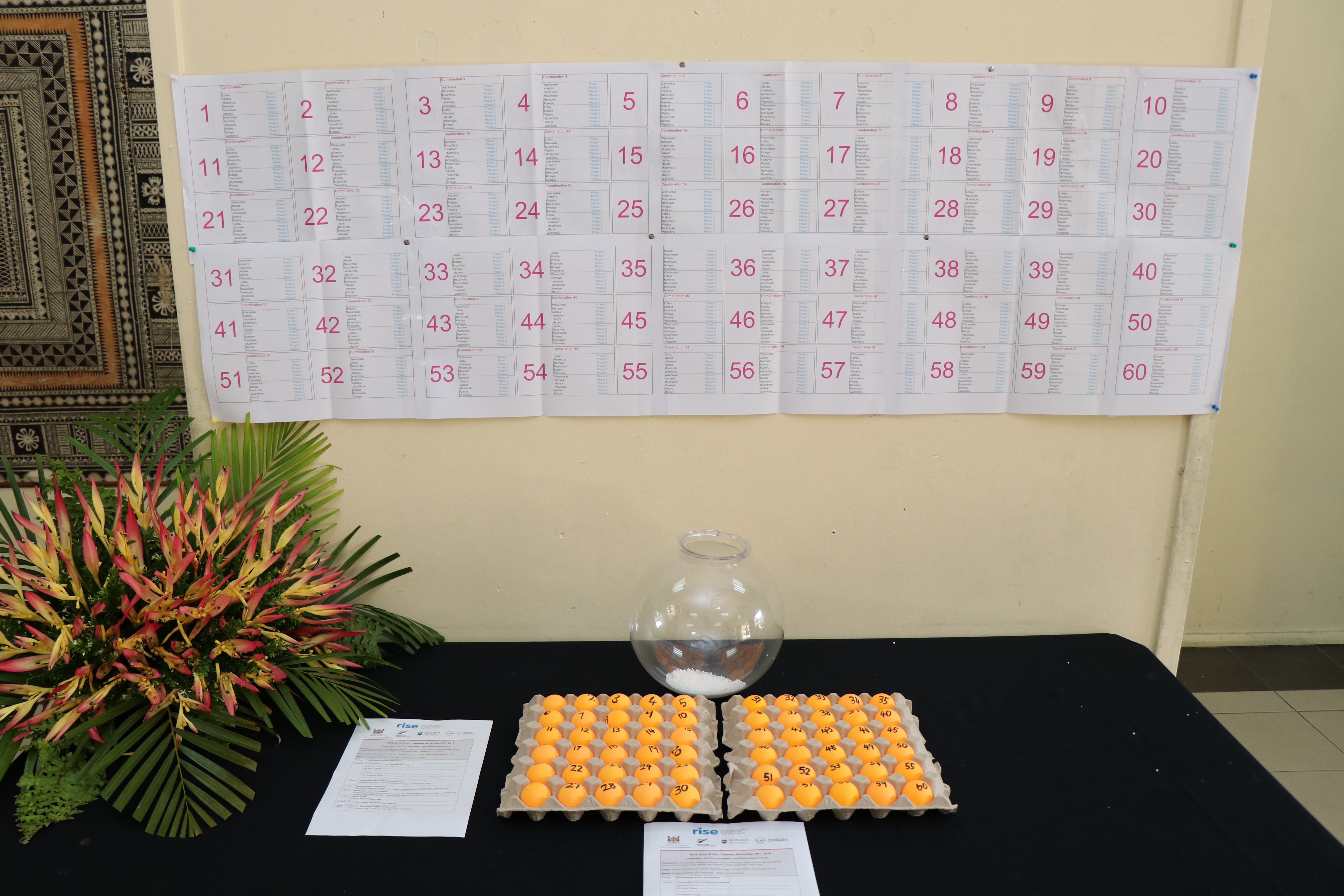 Ping-pong balls match the 60 possible combinations for the communities to be allocated into the earlier-
or later-phase intervention group.

With 60 ping-pong balls representing the 60 combinations, the Fiji team felt that selecting the ball should be in the hands of the communities.

A young girl and boy from RISE’s demonstration site, Tamavua-i-Wai, bravely stepped up to the task. Taking the stage in proud traditional outfits, RISE Community Fieldworker Savu Nofoimuli gently blindfolded the young boy. After a few tense moments of swirling the sand-filled jar, a ball was plucked out, with the young girl handing it up for the number to be read to the waiting crowd. 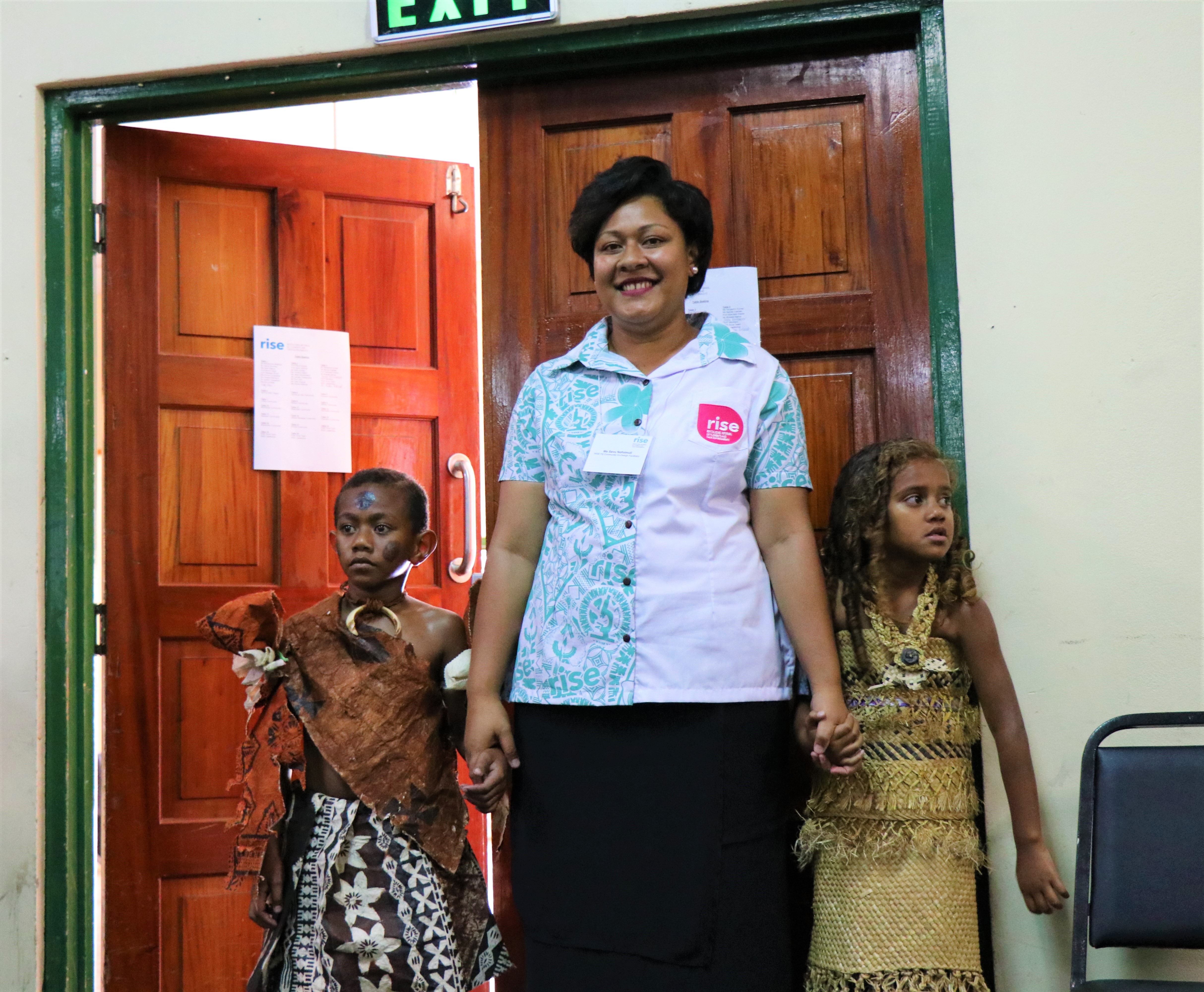 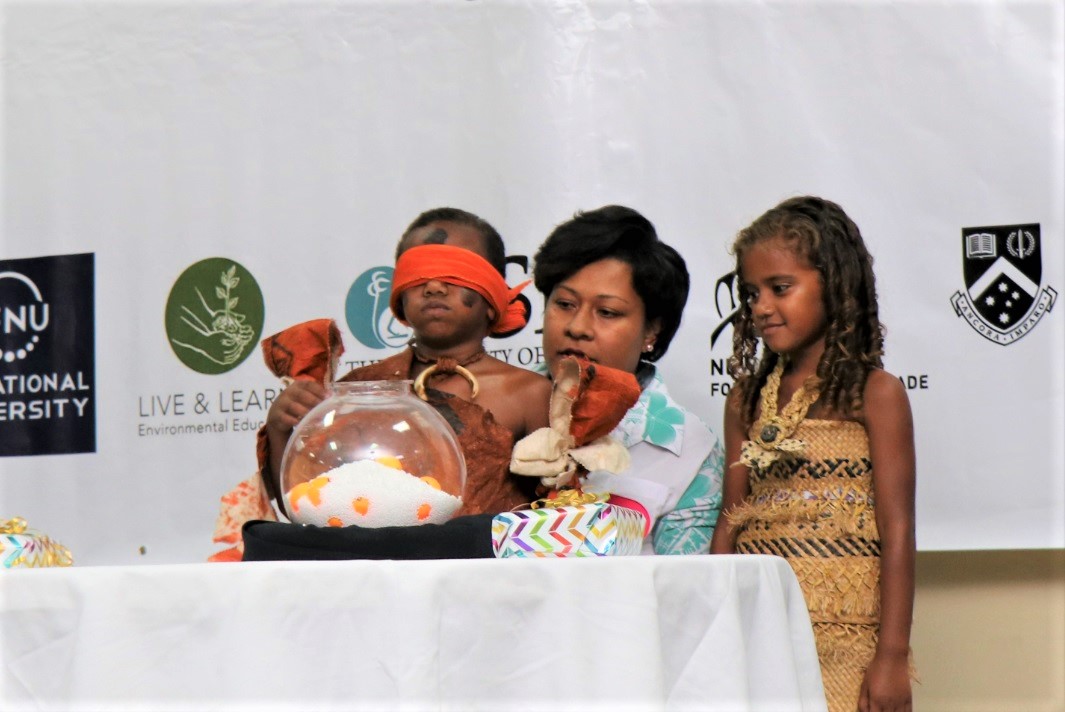 After the draw, community representatives from each settlement were invited on stage to share their honest feedback on having made it to this point in the RISE study.

Sofaia Waqa is a Community Engagement Council member representing Nauluvatu settlement, which was allocated to the earlier phase intervention group. Stepping up to the microphone, Ms Waqa thanked the RISE teams for their dedication and commitment to the work that was done across the settlements during baseline data collection. 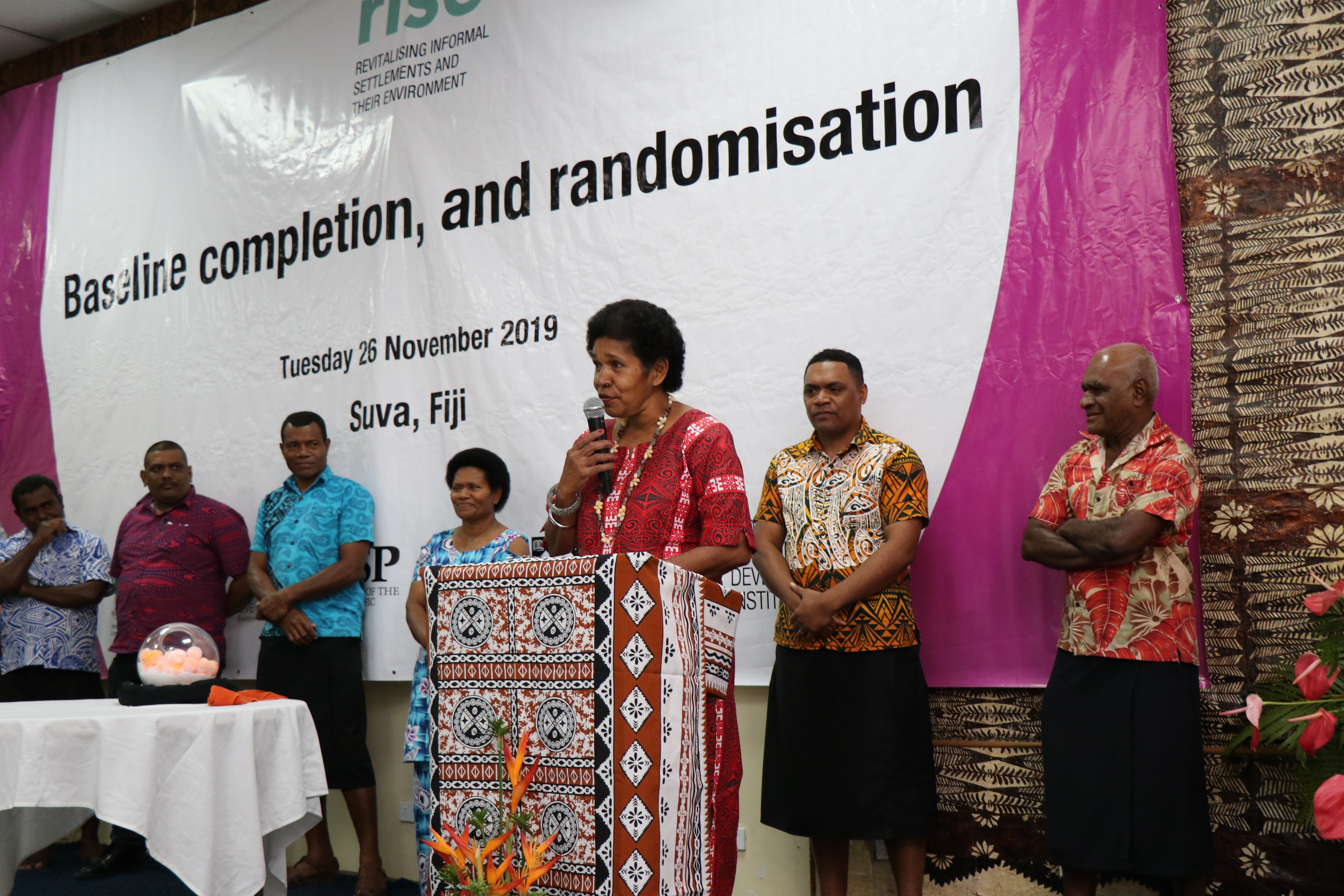 Sofaia Waqa is excited for RISE to progress work with the first six sites, including her community, Nauluvatu.

The ceremony was just as important a day for communities as for RISE’s local partners – giving them a forum to voice their support directly to the communities and the program.

In his welcome address, Director of Fiji’s Ministry of Housing and Community Development, Mohammed Maqbool spoke about the positive impacts that improved infrastructure can have on peoples’ lives.

‘We are not interested in short-term, band-aid solutions to manage our urban growth,’ Mr Maqbool told the room. ‘We are implementing sustainable systems that are cost-effective to maintain and can adapt to changing needs as our communities change’. 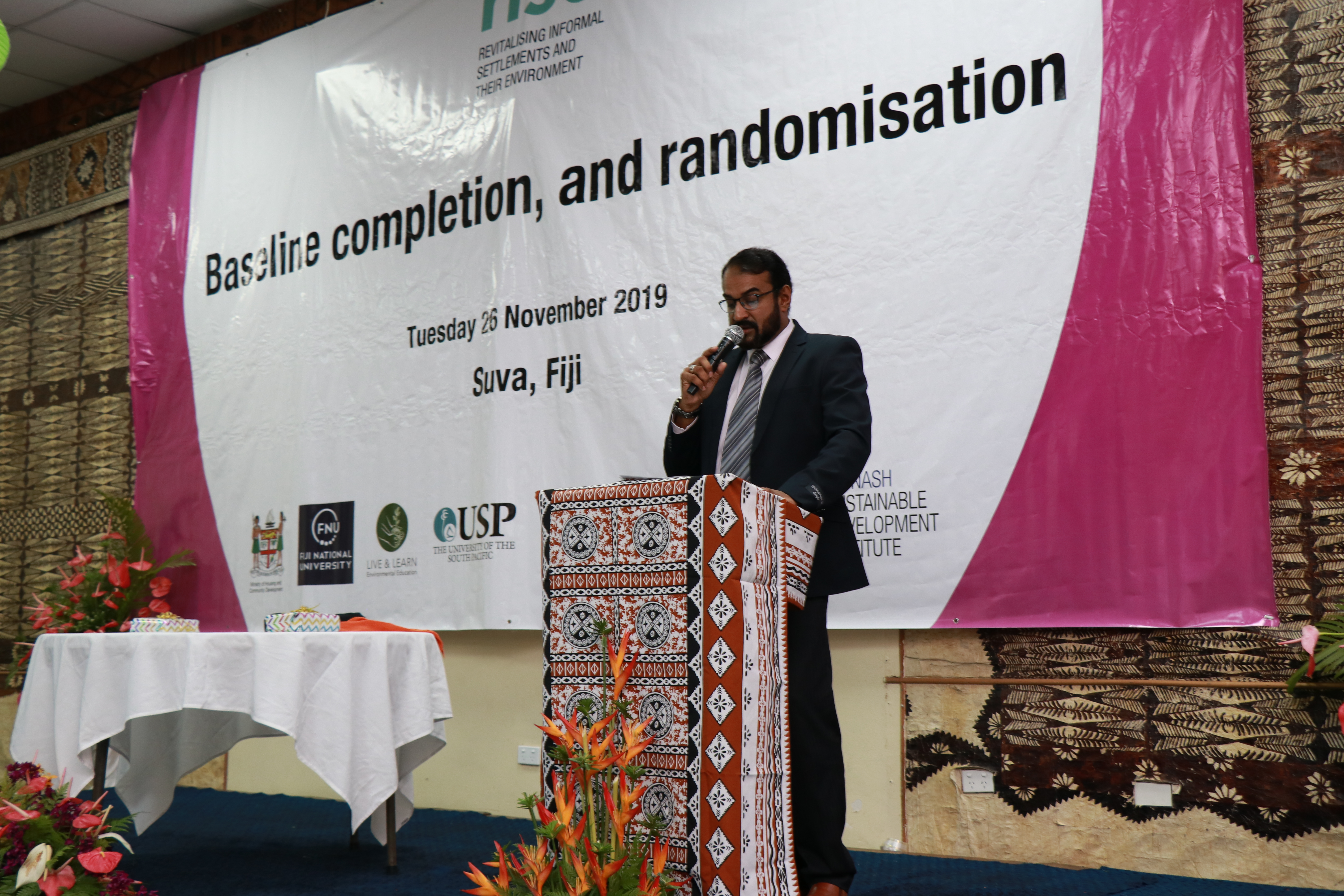 Director of Fiji’s Ministry of Housing and Community Development Mohammed Maqbool said infrastructure
must keep up with the growth of urban communities. 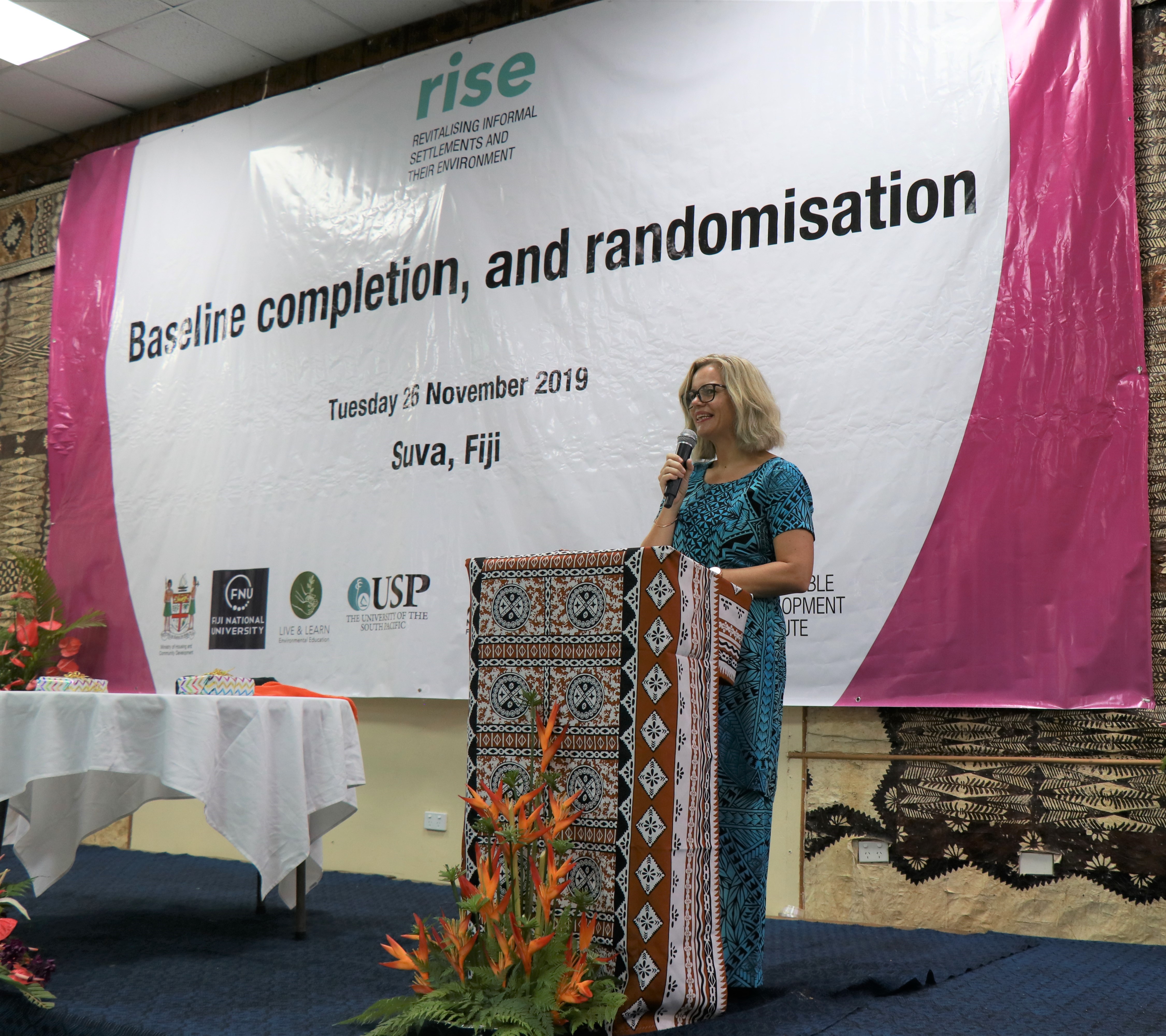 RISE teams are already busy preparing for the participatory workshops with the first six communities, starting in early 2020. The intensive workshops will see every resident in each community invited to work side-by-side with researchers to plan RISE’s water and sanitation upgrades to meet their community’s unique needs.

RISE Program Director Professor Rebekah Brown thanked all the communities for their continued engagement with the program, and reaffirmed RISE’s unwavering commitment to the six settlements who will now wait to be upgraded.

‘To the communities in the later group, we know this is probably not the result you wanted today. But let me be clear: we have made a commitment to work with you, and we will honour that commitment. RISE’s success relies on all 26 communities – 12 in Fiji and 12 in Indonesia, and a demonstration site in each – and with your support, together we can take our learnings and successes to even more settlements around the world’. 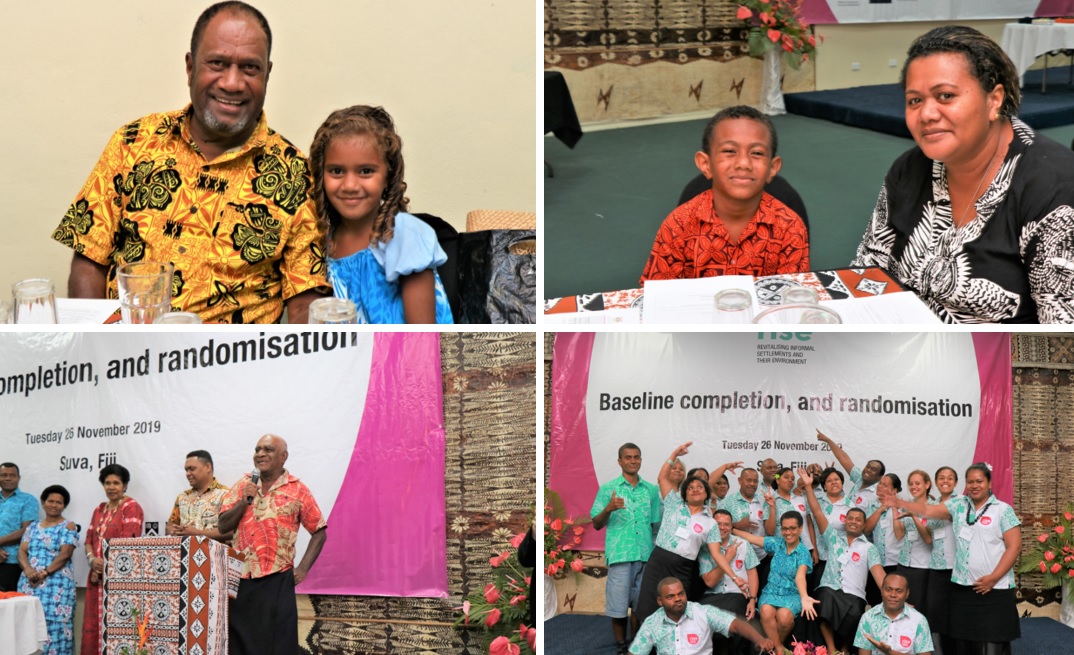