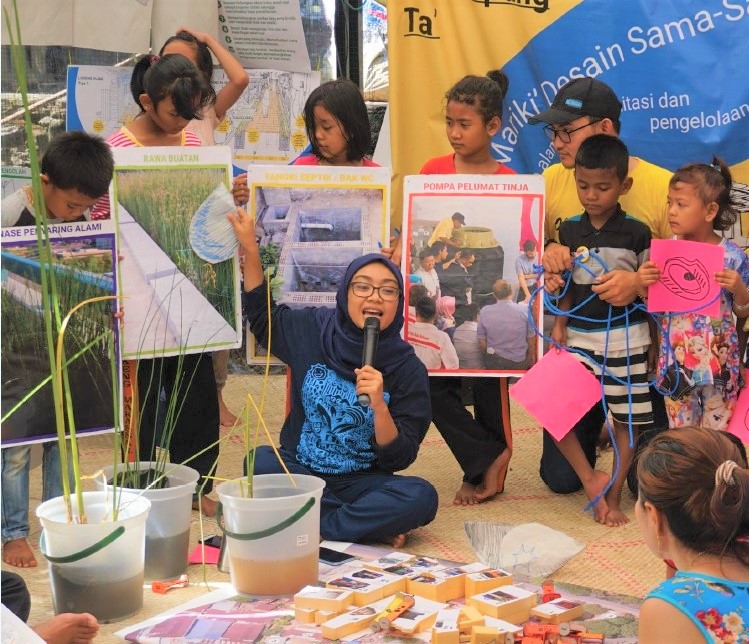 The Australian Government and Monash University have partnered to implement the RISE intervention, a water-sensitive upgrade, for six informal settlements in Indonesia. The grant is provided by the Department of Foreign Affairs and Trade (DFAT) through the Indonesia Australia Partnership for Infrastructure (KIAT).

The AU$4 million will construct sustainable infrastructure that enhances climate resilience for the first six settlements in the RISE trial in Makassar, Indonesia.

‘We are delighted to deepen our partnership with the Department of Foreign Affairs and Trade through the RISE program, beyond their existing support through their Water for Women fund,’ said RISE Program Director, Monash University’s Senior Vice-Provost (Research), Professor Rebekah Brown. ‘The growth of under-serviced, densely populated informal settlements has become one of the most important issues facing urban areas in Indonesia and many other countries around the world’.

Improving the environmental, human health, wellbeing and resilience outcomes for millions of informal settlement residents is a key aim for governments, philanthropists and researchers.

DFAT’s investment comes at a critical time as RISE moves to construction implementation of water and sanitation solutions in six settlements in Makassar, as part of the RISE randomised controlled trial.

Australian Consul-General to Makassar, Indonesia, Bronwyn Robbins says DFAT’s funding is part of Australia’s support for Indonesia to help mitigate the spread of COVID-19, and to build good water and sanitation foundations that are critical to health and wellbeing.

‘The Australian Government is very pleased to increase its contribution to this important program. Our investment will not only deliver immediate benefits for those living in these vulnerable communities and complement local government initiatives around the upgrade of informal settlements, it will also strengthen Australia-Indonesia linkages and build evidence around scaling this innovation across Indonesia and the region’ she says.

A locally anchored and implemented program, RISE has enjoyed strong support from the City of Makassar, the National Development and Planning Agency, and the Ministry of Public Works and Housing.

Makassar Mayor Mohammad Ramdhan Pomanto says that during challenging times like the pandemic, projects must have tangible benefit on the ground.

‘This project will transform the lives of thousands of residents in Makassar, as well as build the evidence, through the RISE research, of what works in terms of innovative water and sanitation approaches,’ Mayor Pomanto says. ‘The City of Makassar looks forward to continued cooperation with Monash, DFAT/KIAT and the target communities for successful implementation’.

Construction beginning is an exciting milestone for Makassar residents, who have spent months designing RISE’s infrastructure based on the unique needs of their community. Ibu Merry from one of the largest communities participating in the RISE trial says, ‘Alhamdulillah, great that RISE is going to resume its build team activities. God speed, no more obstacles this year the construction will begin. Amen,’ she says.

Community leader from another RISE neighbourhood set to receive the DFAT-funded intervention, Pak RT, agrees. ‘Alhamdulillah. We wait for you at the RISE location here. We miss our RISE friends. We wish for the construction, don't wait 'till rainy season,’ he says.

RISE Makassar Build Team Leader Dr Ihsan Latief is ready to bring all the work of co-designing infrastructure with residents into reality. ‘Delivering on the technical solutions that have been designed together with residents is at the heart of what we are seeking to achieve,’ he says. ‘We know what the communities want, and we are committed to making it happen’.

DFAT’s investment builds on foundational funding and support from the Asian Development Bank (ADB) through the Urban Climate Change Resilience Trust Fund (UCCRTF). ADB/UCCRTF’s Technical Assistance grant in 2017 enabled the design and successful delivery of two demonstration projects – one in Fiji and one in Indonesia – which critically showcase how RISE’s water-sensitive infrastructure functions in informal settlement contexts.

Furthermore, ADB’s investment in project preparation for these six settlements has been invaluable in laying the foundations for the DFAT investment.

ADB Senior Urban Development Specialist Joris van Etten is proud of the partnership built with RISE since 2016, and ADB remains interested in scaling up the RISE approach, in line with Bank targets to make cities in Asia more liveable.

‘Together we have laid the foundations for this next phase of work,’ van Etten says. ‘The project to revitalise these six settlements in Makassar leverages the pioneering investment from UCCRTF, and contributes to the Government of Indonesia’s priority to explore nature-based solutions for delivering water and sanitation servicing solutions for the urban poor’.

Construction of the water and sanitation upgrades for the first six informal settlement communities in both Indonesia and Fiji is ready. The water-sensitive upgrades include pressure tanks that pipe sewage away from homes; wetlands and biofiltration gardens that naturally clean polluted water as it flows through sand and gravel media; treated water that can safely be re-used for productive land in communities, and more.

In Fiji, the infrastructure is funded by the New Zealand Ministry of Foreign Affairs and Trade with support from the Government of Fiji.

By delivering essential water and sanitation services, RISE aims to improve liveability, and transform urban health and wellbeing. The long-term ambition is to expand the water-sensitive approach across the Asia-Pacific and the world, to give millions the opportunity to live healthier and safer lives.

Cover image: infrastructure planning with a RISE community in Makassar, Indonesia, prior to COVID-19.