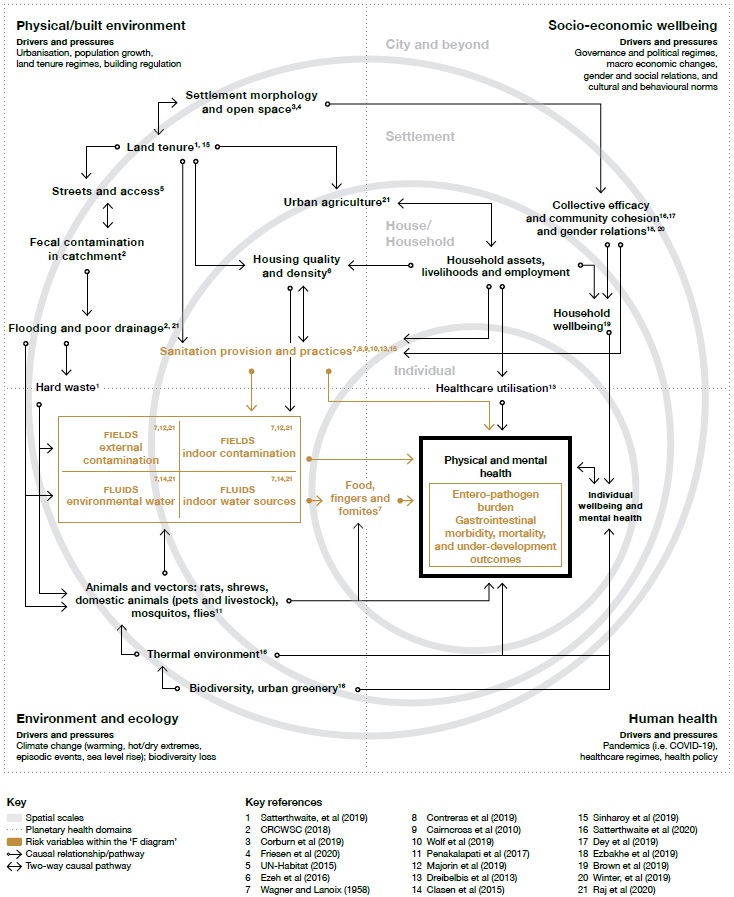 RISE's baseline findings from Indonesia have generated a new model of the connections between human health and the environment.

‘The risk factors that come with poor environmental conditions should not be considered alone, as it can be misleading in characterising a settlement’s environment and population,’ explains Ruzka Taruc, one of the paper’s co-lead authors. ‘We examine the inter-connections between the built environment, socio-economic wellbeing, human health and the ecological environment, which will pave ways to better design and monitor interventions.’

Colleagues at Monash University in Melbourne, Australia and Hasanuddin University in Makassar, Indonesia, developed the model by drawing on baseline findings from the RISE trial in Makassar. It comprehensively accounts for a wider range of variables affecting health in urban informal settlements than conventional exposure models that inform conventional water and sanitation approaches.

‘We know that reducing faecal-oral contamination will help children improve their development and gastrointestinal
health. But traditional household-scale Water, Sanitation and Hygiene (WASH) models and interventions are not fit-for-purpose in high-density informal settlements, due to the pervasive exposure to pathogens, pollutants and disease in the communal environment outside the home,’ says Professor Karin Leder, the paper’s senior author.

Leder says there is increasing awareness of the need for a framework involving social, demographic and  environmental factors that can better assess the effectiveness of water and sanitation interventions on reducing faecal-oral transmission among children. From a practical perspective then, interventions are needed that address water and sanitation needs from an overall environmental and human health perspective, using a systems view.

‘The data we collected over one year from 12 informal settlements across Makassar confirms poor health: among children under the age of five, almost half were experiencing stunting (44.3%), and almost half were underweight (41.1%),’ says Taruc. ‘But the planetary health model pushes further — it empirically aims to link poor health to environmental exposure to pathogens, pollutants and disease vectors in water, food, air and soil.’

Initial results show high rates of potential risky exposures from swimming in waterways, eating uncooked produce, and eating soil or dirt, along with exposure to flooding and livestock.

Leder explains that ‘a planetary health model points us to innovative interventions that address environmental and human health at a range of scales, not only the individual- or household-scale but also the settlement and wider precinct scales.

This first year of data is the critical point of reference against which RISE will assess the results of human and environmental sampling post-intervention (construction of sustainable water and sanitation infrastructure in the program’s 12 participating informal settlements in Makassar). RISE will continue conducting intensive sampling and surveys with residents once the intervention is built for a period of two years to understand the impact of the intervention and further refine this model.

Cover image: The planetary health model emphasises the drivers and pressures in multiple domains, across multiple scales, that must be considered to understand human health in informal settlements.